How much does it cost to replace a gearbox? 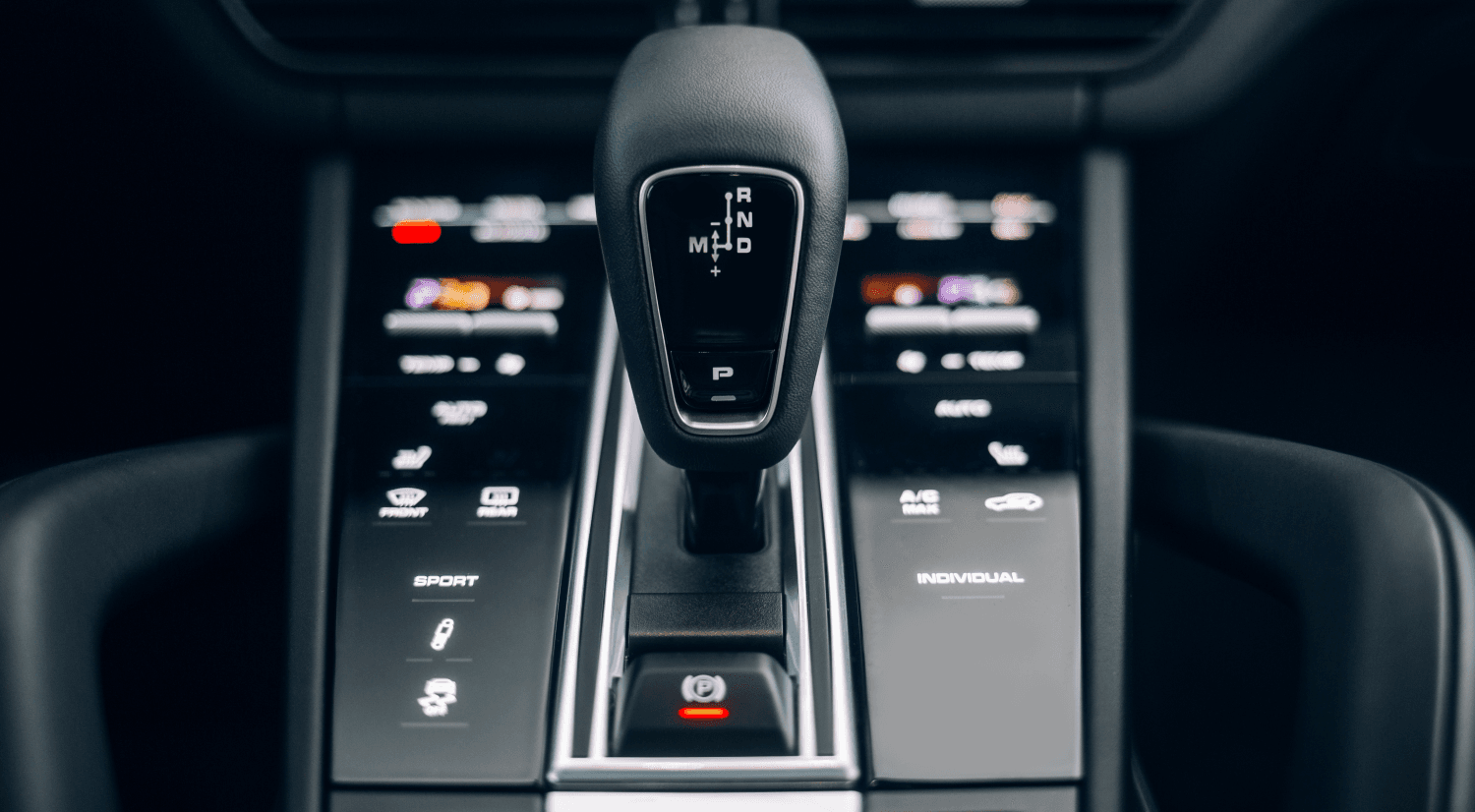 How much does it cost to replace a gearbox?

Allowing your car to transfer power from its engine to the wheels, the gearbox is one of the most critical and complex parts of a vehicle, after the engine itself of course.

Whilst many cars still use a simple 5 or 6-speed manual gearbox, automatic gearboxes with up to 8 gears are not uncommon in newer or luxury cars. The question is though, how much is a new replacement gearbox going to cost if yours develops a fault?

How does a gearbox work?

A gearbox can be thought of the same as the gears on a bicycle, its job is to take the limited range of torque of the engine, and make it usable for every speed, from setting off to 100mph+. 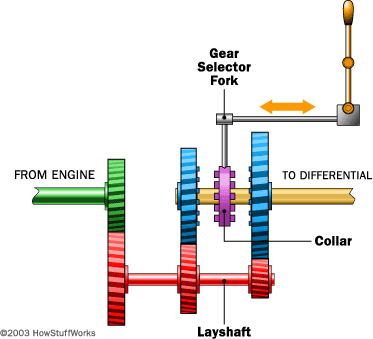 To achieve this, vehicle gearboxes are a complex assembly of machined shafts, gears and bearings. The 4 main components are the input shaft, lay or counter-shaft, output shaft and gears, as seen in the simplified diagram above.

In addition to these, a selector fork is responsible for moving the gears around and is connected to the gear stick via a linkage, predominantly cables or solid rods. There are also parts such as synchromeshes, bushings and levers, which we’ll talk about later.

Power enters the engine via the clutch, which is connected to the input shaft. When the engine is running and the clutch is engaged (pedal released) the input shaft will be spinning - this is why you hear a grinding noise if you try to select a gear without using the clutch.

When you depress the clutch pedal, the input shaft stops spinning, using the gearstick to select a gear, the selector fork moves the appropriate gears along the lay shaft, to transmit power through to the output shaft to the wheels, in whichever gear is selected.

Replacement cost of a gearbox

Because of the complexity and precision required to efficiently transmit the engine's power, gearboxes take significant amounts of materials and skill to produce, this means they can be expensive to make, repair and replace.

The typical manual gearbox replacement cost in the UK is:

Because gearboxes generally last a long time, it is often possible for a garage to source a reconditioned unit, instead of a very expensive gearbox from the main dealer.

All the prices listed here are averages across the UK, with types of cars itemised where relevant.

Split your bill into monthly payments at no extra cost and find a trusted repairer with Bumper.

Can my gearbox be repaired?

Depending on the particular problem and time available, it may be possible for your broken gearbox to be repaired. The issue that is usually present with this method, is that a typical garage will not attempt to repair internal gearbox problems.

Whilst there are many gearbox specialists in the UK, it will take extra time for the mechanic to remove and send away the old gearbox for repair. All the while your car will be sat un-drivable.

If your car is particularly expensive, rare or performance orientated, this might be the cheapest option, as a replacement gearbox may be hard to come by.

Including modern high-end and performance cars, there are many different options available for automatic gearboxes, from traditional 5-speed ‘torque converter’ gearboxes to multi-clutch 8-speed units.

Whilst automatic gearboxes often involve fewer components in the car, they can be much more complicated and difficult to work on than their manual counterparts. 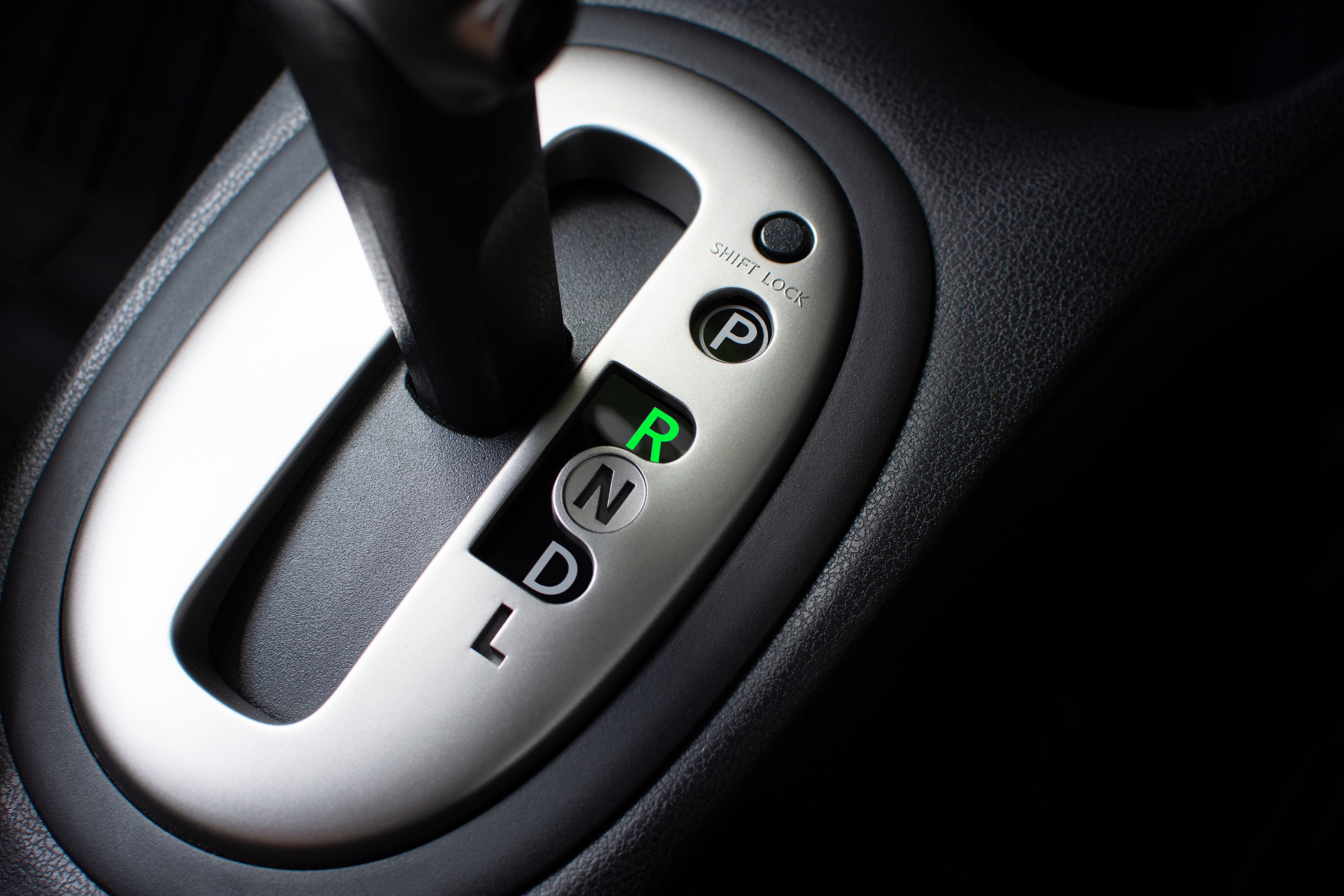 Typical issues with gearboxes and their cost

Because gearboxes are such complicated parts, there are a few different failure modes:

Popping out of gear

Typically caused by either a worn synchromesh or sometimes a badly adjusted gear linkage - this is usually much cheaper -  this can be an annoying and dangerous problem.

Because the output shaft of the gearbox spins at the same rate as the wheels, when the car is in motion, the new gear selected is trying to engage with a spinning gear on the output shaft.

To mitigate this, a part called a synchromesh is added to every metal gear - apart from 1st, which is why it’s difficult to shift down from second whilst still moving - to ‘synchronise and mesh’ the two spinning gears.

When this wears, the gears will have difficulty meshing properly and the forces of this cause the newly selected gear to be forced back into place, thus pushing the gear stick back too.

Replace a synchromesh involves removing the gearbox from the car, and a specialist replacing the part, as the actual component is relatively cheap, it’s usually worth refreshing them on every gear.

One gear not driving

If a gear can be selected but there is no drive, this tends to indicate the particular cog in the gearbox is broken or stripped. This issue will often be accompanied by a grinding or whirring noise.

Like the problem above, it will require the gearbox to be removed and the gear replaced. This is usually caused by either a manufacturing defect or aggressive use, such as trying to engage the gear without engaging the clutch or using excessive force.

The car won't go into gear

This can either happen all of a sudden or gradually, the gear selector linkage is made up of many components, either cables and pulleys or solid bars and rotating joints. This is to transfer the motion of changing gears in the car to moving the selector fork in the gearbox.

Thankfully, even if you cannot select any gears, the selector mechanism is usually accessible by a mechanic with a lift, and should not take too long to replace.

Many manufacturers don’t offer the individual components that make up the linkage as spare parts, but the whole assemblies usually don't cost much more than £200.

In some cases, you might find just a clip or bolt has become loose, and it will be a quick and cheap fix. This problem can also be caused by a faulty clutch, check out our article here for more information.

Unfortunately, this problem could be caused by multiple things, most of which will require some level of gearbox reconditioning.

Common culprits for noisy gearboxes are shaft bearings and worn gears. Like most gearbox problems the individual parts are cheap, but it takes a fair amount of effort to remove and replace them.

In some cases, you may find that the issue is caused by a lack of gearbox oil. If caught quickly lasting damage can be prevented by a top-up - make sure to check your levels regularly.

How long should a gearbox last?

Unfortunately, we can’t control or see how the previous owners of our cars treated them. Poor use of the gearbox is the most common cause of serious problems and this may affect the overall lifetime.

How does a gearbox get damaged?

Like most things automotive, parts need servicing, maintenance and mechanical sympathy. If a gearbox is run without oil it will wear much faster than if used properly.

Common causes of gearbox issues are:

Things like towing heavy loads or racing will shorten the lifespan of your gearbox, so be wary of a car with a towbar (unless you need it) and clues of an aggressive owner.

How do I know if my gearbox needs replacing?

If any of the symptoms start to occur, such as your car popping out of gear or not going into gear, or if your gearbox is making odd noises then it's probably time to get your car looked at by a mechanic. It’s not really possible to know exactly if the whole gearbox needs to be replaced until it’s looked at internally.

If your issue is gear selection (the gear stick feels vague and disconnected) you might only need the linkage replaced. If you’ve lost drive in one or more gears, or they’re making a bad noise, it could be you need a new gearbox. 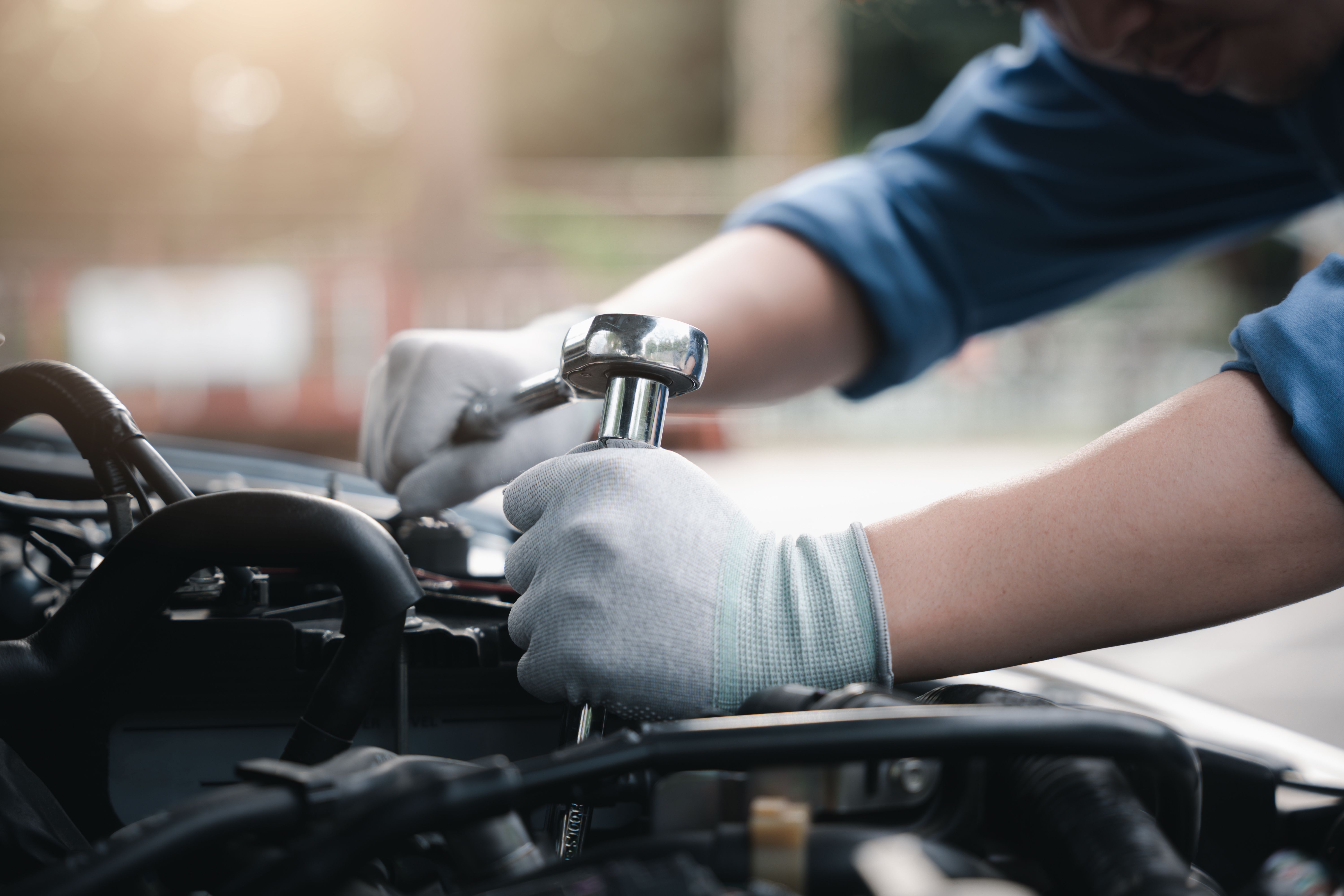 Is it worth replacing a gearbox?

After the engine, the gearbox is probably the most expensive part of a car to replace completely. To know if it’s worth replacing the gearbox you need to consider the following:

In short, if the cost to replace the gearbox isn’t too hefty, and the car is in reasonable condition and age, it’s probably worth fixing your gearbox.

Not only will it mean you don’t need to source a new car, but you know how your one has been looked after - after all a new one could develop a gearbox fault of its own in short order.

How do I protect my gearbox?

With all this talk of expensive repairs, it’s good to be equipped with the knowledge of how to sustain your gearbox if it’s currently working fine. Follow these tips and you should be able to sleep easy knowing you are caring for your gearbox.

Keep up with servicing - above and beyond the intervals

Whether the gearbox shares its oil with the engine, or uses its own, keep it regularly maintained according to the manufacturer’s specification. Using the wrong type of oil can also cause serious issues to develop over a long period.

Some manufacturers state their gearboxes are sealed for life, Volvo and BMW for some. If you talk to independent specialists however they will say that this is not necessarily the case, and they benefit from oil changes like any other.

You can't avoid needing to do things such as towing or driving in hilly areas but refrain from being too aggressive with the gearbox, gentle and smooth inputs to the gearstick and accelerator reduce wear.

Always use the clutch to change gears. It is possible to change gears without using the clutch, motorcyclists often do this, but in a car, a large number of forces can easily damage the gears inside the gearbox.

Don’t try to force the gearstick

Particularly when manoeuvring, you may find that reverse or first gear doesn't always slot into place nicely. This is due to those synchromesh devices we talked about earlier - they’re not present on first and reverse.

Instead of forcing the gear stick, release the clutch pedal (make sure you're in neutral!) and then press again. This spins the shafts slightly and should allow the gears to now mesh easier.

What to do if your gearbox breaks?

If you can, drive the car to a safe location and call for recovery. It may be possible to drive the car a short distance if, for example, you have lost one gear only, by not using that gear.

If your gearbox is making a noise in all gears, though, don’t keep driving. You may make the problem worse and therefore more costly to fix.

Search for a reliable repairer in your area by entering your registration and postcode with Bumper.

Apply for a credit limit of up to £5,000 and split the bill into interest-free monthly instalments.

Your data is safe and secure

PayLater is a form of credit provided by Bumper International Limited subject to status. You must be certain you can meet all payments. 18+, ROI residents only. No fees, interest, or other charges, however a one-off missed payment fee (€12) may be charged. Missed payments may impact your credit score and your ability to borrow in the future. Recovering missed payments may involve using a debt collection agency, or legal action. Bumper isn’t regulated by the Central Bank of Ireland. T&C’s apply.